Tata Motors has organized "SkillFest," a first-of-its-kind championship in the commercial vehicle industry. Skill Fest is a National level championship for Service Advisors of Tata Motors Channel Partners. It was launched by the Commercial Vehicle Business Unit customer care team in collaboration with Castrol India Ltd in December, 2013 with a view to evaluate the technical and soft skills of Service Advisors. Through this initiative, the Customer Care team aims to map the skills of all Service Advisors from across the country and develop new training programs to enhance them.

Speaking on the occasion, Mr. Ravi Pisharody, Executive Director, Commercial Vehicles, Tata Motors Ltd. said, "Tata Motors vehicles are incorporated with the latest technologies and backed with significant customer inputs, which can only be addressed and handled by trained service advisors. As the industry grows and transforms, it is imperative that the service aspect also evolves correspondingly. SkillFest focuses on this critical area by bringing together experts from its channel partners and award them for their capabilities."

This highly intense and competitive championship has 4 levels of evaluation - Sub-zonal, Area office, Regional and National. Each level of evaluation involves tests having a combination of theory and interview on varied topics. The program received an overwhelming response from Tata Motors channel partners witnessing participation of more than 1000 Service Advisors from across the country.

The final round of the championship was held at the Pune plant on 20th February, 2014. 20 service advisors from various parts of the country attended the championship. The Award ceremony was held on 21st February, 2014 at Vivanta by Taj President, Mumbai. The occasion was graced by senior dignitaries from Tata Motors Ltd., Castrol India Ltd. and Galaxy of Service Advisors. 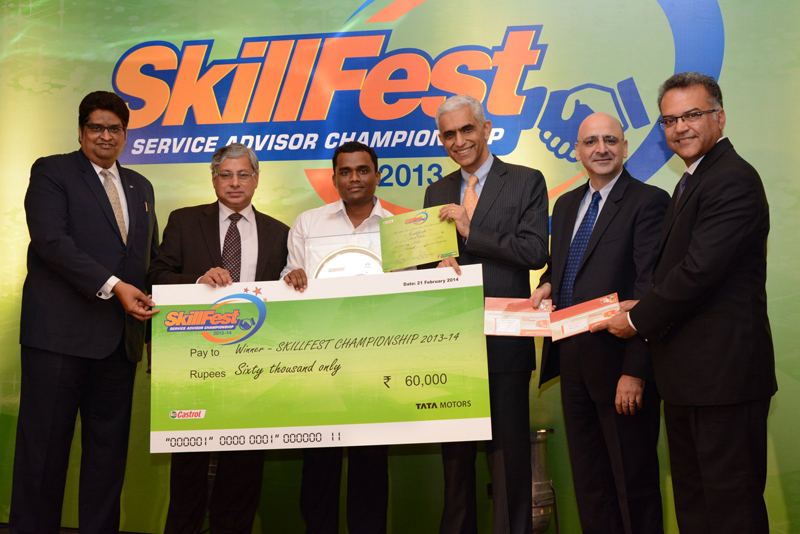