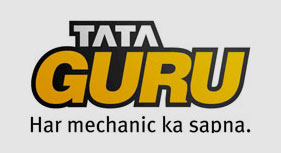 In 2008-09, there were a total of 6.9 million repair jobs for TATA commercial vehicles out of which only 2.7 million were serviced by TATA authorized dealers or service stations i.e. over 60% jobs not serviced by TATA Motors, but by private or unauthorized workshops. Also, there was no assurance of genuineness of parts used in these jobs for the customers - this would totally depend on the mechanic of the private workshop.

TATA Guru was started in Dec 2009 with the following objectives:

By March 2013 this program has 35,000+ mechanics registered across the country

Biggest reason for its success is it gives rewards and recognition to mechanics. Many parts carry points that mechanics SMS to a central number, these get credited to his account and on accumulating such points, he is eligible for rewards like car, motorcycle, refrigerator, gold voucher, holiday packages, accident insurance, mobile phone etc.

The program is interactive as each mechanic is provided with a unique user ID and password, which he can use to check the online status of his points, redemption of his gifts etc. on www.tataguru.com.

Success of the program lies in its ability to create emotional bonds with mechanics and his family as a lot of the gift items are for the entire family - LCD TV, washing machine, pair of wristwatches, digital camera, gold vouchers etc.

Also, mechanic meets are held where felicitation of mechanics registered under TATA Guru - gifts are given to them through a formal ceremony. This recognition creates deep loyalty among the mechanic community.